How to Frame an Arch or Curve on Your Deck

To frame an arch, or curve along the edge of your deck, your joists need to be long enough to cover the range of the curve. The curve itself can be laid out using a string, or light piece of lumber as a compass.

For this method follow the basic instructions for the string method, substituting a strip of lumber in place of the string.

Cut the joists off following the marks you just made. Use a handsaw, or reciprocating saw with a coarse blade. Start your cut lined up with the top edge mark and use the marks on the faces of the joist to keep your blade aligned to the correct angle as you cut down through the joist.

Install Blocking between the joist ends along curves to prevent joist spacing from shifting. Cut your blocking pieces from joist materials and miter the ends so that each piece fits as close to the ends of the joists as possible. Nail, or screw blocking in place by toe-nailing your fasteners through the mitered ends into your joists.

Standard two by lumber does not bend well. If your curve is more than slight, you will need to work with something thinner. Standard framing lumber, ripped to ¾ inches thick on a band saw will work for average curves. You will need two layers to provide a ridged edge.

For tighter curves, slice your framing material thinner and build it up. Three layers of ½ inch thick material works well. With multiple layers, apply wood glue between layers and use clamps along the face to laminate the pieces together.

Small vertical cuts, known as “kerfs” can also be made in the back face of ¾ inch material with a circular saw set to 3/8 inch depth, to make the piece more flexible. Cuts are typically spaced ¾ inches apart.

Attach your face-plate pieces with screws through the face-plate at each joist end with screws. Use at least three screws in each joist, top middle and bottom. Do this with each layer, positioning screws in top layers so that they do not hit screws already installed. Use a countersink bit, so that screw heads will run in flush with the face-plate surface. 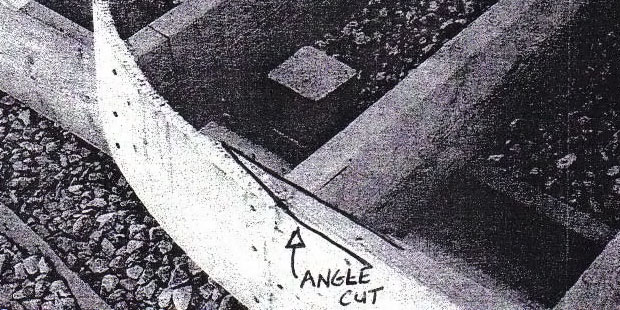 Where joints are required in curved face-plates, use a reciprocating saw to cut miters at greater than 45° at the ends where the two pieces meet. The angles should be the same on both pieces. This creates a thin wedge at the end of both pieces, for a longer overlap. Glue and nail the overlap, then sand the joint smooth once the glue is set.

If the curved edge of your deck is a step, or matches up to one, a skirt is needed underneath the edge of the deck face-plate. The skirt should be set back so that the face-plate stands out at least ¾ inch in front of the skirt. To do this, attach skirt supports to each joist end, so that they extend below the bottom edge of the joist the same height as the thickness of the joists, or 7 ½ inches for 2x8 joists.

Install the skirt using the same material and technique as the face-plate.

Cut stair stringers from 2 x 12 PT lumber for every 16” of straight face-plate and one every 8 to 12” on the curves. Stringers on curves will need to be set on an angle to the main frame, so that the stringer is as close to perpendicular with the face-plate as possible.

Block between joist ends as described for deck edge curves.

Install the face-plate as described for deck edges. Leave room for cedar, or composite if called for. Mark spaces and cut for deck lights, if called for.

Composite decking companies, including Trex, often make color matched edge cladding that can be bent to fit curves. Use this if possible, rather than cutting composite material thinner to fit tight curves.

Install the front trim board, flush with the deck top, over your face-plate, using the same techniques. 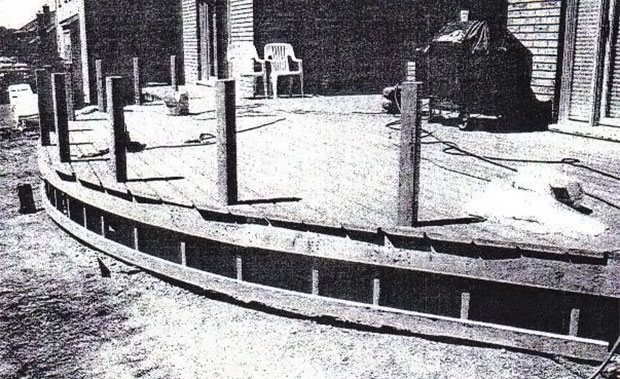 Decking boards cannot be bent to follow curves in the edge of the frame. Lay your deck boards to overlap face-plates and mark the curve as previously described, by running a pencil along the bottom face, against the face plate. Remove the marked boards, cut to fit and reinstall. Use a jig saw or band saw for cutting the curves. 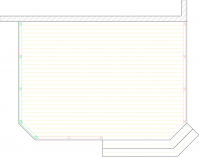